Hire a beautifully designed Dion Lee dress for your next event. Edgy and elegant with a cult following, Dion Lee's designs are perfect for cocktail parties and daytime events.
512
Sort by:

Hire a beautifully designed Dion Lee dress for your next event. Edgy and elegant with a cult following, Dion Lee's designs are perfect for cocktail parties and daytime events.
Listings: 512
Sort by: 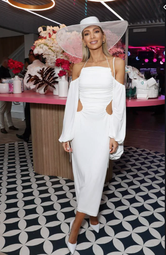 Dion Lee has established himself as the most critically lauded and awarded, fashion innovator to emerge from Australia in recent times. After graduating from Sydney Institute of Technology in 2008, Dion Lee was debuted at Australian Fashion Week in 2009. Lee was the first designer to stay a runway presentation at the Sydney Opera House in 2010. National and International acclaim followed with commercial support from retailers in Australia and abroad. From this, success has continued to follow Lee. Lee has received continuous support from industry titles such as Vogue US, Vogue UK, Vogue Australia, Vogue China, Harper’s Bazaar, Elle US and Marie Claire Australia.

Renowned for its experimental construction combined with traditional tailoring, the Dion Lee brand has pioneered a modern identity for Australian fashion. Its’ design aesthetic is technical with an intelligent sensuality. Each collection marries innovative construction, with a consciousness of the female form. All textiles used are engineered to form sculptural embellishments. Further, architectural silhouettes are dissected to allow for movement and the flow of air and light.

In Australia, Dion Lee is home to six flagship stores, and is sold globally in over 40 of the world’s most exclusive retailers including Net-A-Porter, Bergdorf, Goodman, Selfridges and Lane Crawford.

The future sees continues success for Dion Lee, with each design created to reflect Dion Lee’s technical but sensual aesthetic.

The Volte is an online dress hire marketplace. Offering various designer pieces for hire, The Volte makes going out just that bit easier. Dion Lee designs are offered for hire at The Volte. You can wear your dream Dion Lee dress for just a fraction of the price. No longer are the days of having to worry about outfit repeating. By hiring dresses from The Volte, you are guaranteed to look fabulous at every event.

From maxi dresses, midi dresses, mini dresses, to slip dresses and wrap dresses, there is something from Dion Lee for everybody. With unlimited choice in design, from the new arrivals, latest seasons to past seasons, The Volte is versatile.

The Volte is available nation-wide, meaning that you can hire a designer dress from almost everywhere in Australia, including Sydney, Canberra, Victoria, Perth, Brisbane and Hobart.